Change is a good thing!

I started writing this post a month ago and completely forgot all about it until I read this latest post by Valerie Foley.  Autism Spectrum Disorder is vast and each child is so different........ for one child who hates change in their life/daily routine/whatever, there is a child who doesn't mind change!  Unfortunately, I have one of those kid's who really battle with change!
~*~
A friend of mine recently attended a workshop on Aspergers and she related back to me a comment that was made by one of the presenters.   The delegates were told to keep everything structured and predictable so that the children with autism didn't get stressed. Hmmm, this may sound practical but let's be frank here, the 'real world' is totally unpredictable.  If I keep Nick's routines and everything involved within those routines the same,day in and day out, how is he going to survive when he is thrown a curve ball???


I have also just read an article in a respected publication from the USA and the following sentence hit me - "In fact, according to many experts, one of the hallmarks of autism is the preservation of sameness".  Perhaps I picked up on this comment because I have been thinking about how important it is for Nick to learn that 'change is ok'!!  I do know that I don't want to maintain the 'preservation of sameness'.


We had a major curve ball thrown at us a few years ago in the way of electricity cuts. Nick was very stuck in a regular pattern of coming home from school, turning on the tv and then eating toast for lunch.  Due to the lack of electricity on various days of the week, life suddenly became extremely stressful for the both of us!  Nick couldn't understand why the tv wasn't working and his distress was horrible. The toast story was also a problem - I  tried cooking the toast over the gas hob, however, the flavour was different, and Nick refused to eat it and he didn't understand why he couldn't have his same old toast!!


He used to freak if I drove a different route home from school.
He refused to eat supper if I was in the room.
He would refuse to eat if his food wasn't in his regular bowl.
He would only drink one kind of juice
He had to have his favourite blanket on his bed
He would only eat apples at home - never at school!
He would only watch a particular DVD
........... and the list goes on..............


We have been working hard with Nick - introducing tiny little changes, letting him feel comfortable with those tiny little changes, adding another tiny little change. He has certainly become more flexible and the wheels don't fall off as much as they used to! Hey, he will now eat an apple at school! Use the loo wherever he may be! So what if the bread has gone mouldy and he can't have toast! (it happens in our humid climate!!) Oh dear, the TV has been stolen - never mind! Tired of listening to Britney Bloody Spear's - not a problem, off she goes and on goes the radio! ........ and the list goes on.........


This weekend!  Friends of ours (who have the cutest little kids) invited us over for an impromptu supper! Yay, we thought! Oh hang on a minute, shit -what about Nick? Our invitation was for 5pm, right in the middle of the Nicky, supper, bath, muti, tv, bed at 7pm routine!  We never take him out at night because we feel we need that time to be 'autism free'.  But this was a Saturday night, no babysitter available AND WE REALLY WANTED TO GO!  Also bear in mind, we were a little bit scared of taking him out, how would he behave? was he going to need our constant attention? what about their dog, the noise, the kids?


Anyway, we pulled out the trusty old laptop that is only used by Nick (sometimes you just have to provide something for the kid to stim on!!).  He was a bit stressed when we rocked up at our friends house, however, as soon as that laptop was plugged in he was away home and dry! :)  A lovely evening was had by all and I wish I could tell you that it ended happily ever after! :(


By the time we got Nick home at around 9pm, his bottom lip was quivering and he was becoming quite stressed. He became very confused because there was no bath time or tv time. He cried when I helped him take off his clothes, he cried some more when I tried to brush his teeth.  He went searching for that special blanket (which is very rarely used). He cried as he climbed into bed and he kept making the gesture for 'help'.  However, every time I went to give him some comfort he pushed me away and waved bye.  With the heaviest of heart's I said goodnight and closed his bedroom door (also part of the routine!)


Sadly, poor Nick was also upset last night.  He was sleep deprived from his night out and his emotions ranged from having the giggles to tears rolling down his cheeks.  Again, I had to say goodnight and close his door.  As much as I wanted to help him I couldn't because he didn't want me!

Tonight; Nick happy to be in his most favourite place in the world
(2nd favorite being school)
HOME! 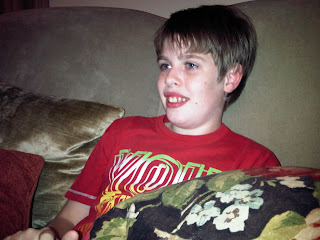 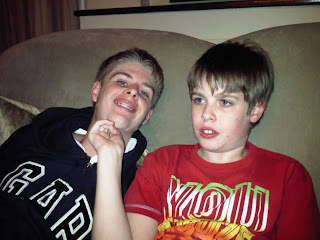