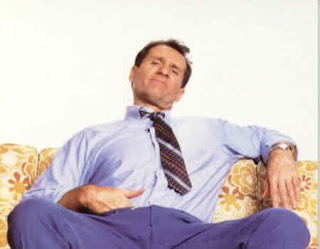 Yes, I used to watch Al Bundy! :)
Puberty and a changing body bring all sorts of issues ~ and in my case ~ these issues are shared!!!
Perhaps you don't want to know about this 'sensitive' stuff, however, this is part of life with a special needs child/nearly a teenager! My kid was cute when he was little and it was a lot easier to be 'seen in public' but what happens when he grows up? He is certainly not cute any more and he also attracts a lot more attention!


Nick is growing up and although the hormones are not raging, he is sprouting hair you know where and that little thing is not so little any more and it's going up and down like a bloody yo-yo!  Let's be frank here (and my apologies to any males that read this!) is it really necessary for guys to rearrange and scratch those bits all the time?!!!!!!!! Unfortunately for Nick, he doesn't have the social awareness of inappropriate behaviour.... also throw in some OCD and we have trouble on our hands!


It's a bit like the door story in our house ~ any door or drawer that is open needs to be closed and the handle needs to be in place. And the loo story ~ after flushing the loo, he has this compulsive need to go back and flush it again, then the light must be turned off and yes he goes back to double check that the door has been closed! If I stop to think about all of Nick's little 'patterns' my head would spin! He has definitely improved over the years ~ there was a time when he couldn't cope if he was interrupted during one of his 'patterns'. These days he is easily distracted and sometimes all I need to do is give him a look or make a comment and he will stop!


However, my 'looks', 'frowns' and 'comments' are not working with this latest 'man thing'......  all I seem to be getting are permanent lines!

Take note N V V!! :)
I have also tried ignoring the kid.....but that didn't work!  I tapped him on the hand a couple of times (which caused him to look at me with big sad eyes and that made me feel bad!). I have been gentle, firm, loud, cross, irritable.......
I am now trying to be firm and consistent
with a big fat 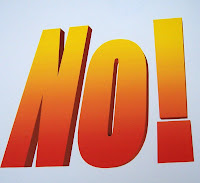 I so want to be like the mum in The Black Balloon!  No, not pregnant!! She was very chilled and took everything in her stride ~
Therefore, on that note, I do have to tell you............this man thing is a bit of a problem, BUT, I have decided not to take it too seriously and would rather have a good chuckle (please join me!) ...... and then those lines can be called 'laughter lines'!
~*~