When it comes to planning any type of RDI engagement with Nick, I sometimes struggle to think of an activity that I could use as a prop for that engagement.

Nick can be a bit of a tricky customer, in that he is limited in what he can do. In part this is due to his motor planning issues and lack of imagination. He does not have any interest in playing independently and he needs a lot of guidance to ride a bike, kick a ball, draw or paint! He really battles with something as simple as brushing his teeth.

The advantage of Nick’s limitations is that there are SO many activities I can introduce to him. Anything and everything I do with Nick will be a learning curve for him and an awesome opportunity to engage with each other. I am very aware that the interaction is more important than the activity, although I think that it can be a two way street, as the activity can also be a learning tool.

For a while now I have been focusing on the chores that need to be done around the house. You know..... cooking, cleaning and all that other fun stuff that needs to be done daily! It has actually been working out quite well and I have discovered that Nick is quite happy to get involved with food preparation.

Nick is also a whiz at the supermarket. Shopping with my boy is such a breeze these days and it provides further engagement opportunities. I am sure that we look quite a sight in the isles, as at times we have a bit of a throwing contest. For example, I might toss a carton of milk to Nick and he will then deliberately throw it into the trolley (he is very aware that I want the carton to be placed carefully!). *Ooh, I have just thought of an idea ~ we can have a throwing activity at home but use breakable items such as eggs!

Now that we have added two dogs to our family, I have also been setting up planned engagements in which we have to collect the dog toys, feed the dogs or even take turns to throw the dogs a ball.

Just for interest sake I am going to list a few examples of simple activities I have chosen in the past and continue to build onto, step by step....

* I collect an item from the cupboard and pass it to Nick. He places it on the counter
* I give an item to Nick and he places it in the cupboard
* Together we put the items away
* I measure out ingredients and Nick puts them into the bowl
* I pour an ingredient into a bowl and Nick stirs
* I stir, Nick stirs
* Together at the same time, we spoon the mixture into another bowl
* Nick adds an ingredient to the bowl and I stir
* I pass Nick a dirty plate and he puts into the dishwasher
* Nick holds the jug and I turn on the tap and together we fill the jug
* I cut up the vegetables and Nick places them in the saucepan
* Together we put the rubbish into the bin

Very simple co-regulatory activities, yet initially very difficult for Nick to do. Through my guidance he now feels competent with all of the above.

My next step is to now think about his next step! How can I expand on what he already knows? What can I add that will be a little challenge for him? What can I do to invite him to take that one step beyond his level of competence? 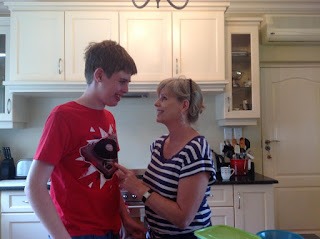 If you are on facebook you can find me and my boy by clicking on this link..... Bright Side of Life!