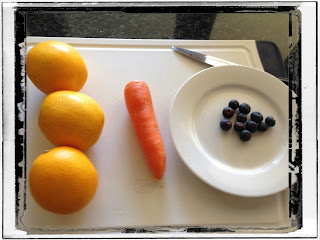 I am on a mission to get my boy healthy. Nick's diet is absolutely horrendous and it has given me many a grey hair over the years. His issues are a combination of sensory sensitivities, his lack of confidence at trying new things and the regular food patterns that he has created and refuses to deviate from.

For sure, he is reasonably healthy, although I don't like the look of the dark circles under his eyes and the dullness of his skin. I won't bore you with the other problems that crop up!

In order to move forward, I realise that I need to guide Nick very slowly, one tiny step at a time. I cannot introduce a new food and expect him to eat it without any hassle. I have tried ~ it didn't work. I have given up on the idea of *hiding* the good stuff in his regular food. I tried ~ it didn't work. As for bribery ~ don't even go there!

For the last few months I have been offering Nick a *smell* of different foods. At first he was resistant, however, over time he has become a lot more comfortable with putting his nose close to food. I will continue to do this and also start inviting him to place various pieces of food on his lip.

Not so long ago, the ladies at school mentioned to me that one of the other children didn't want their juice, so it was offered to Nick, without any pressure for him to try it. Everyone was blown away when he actually drank the juice! He has also rediscovered a taste for milkshakes!

This became my starting point. If Nick was becoming flexible with trying different drinks, then I could do something about it at home AND keep it healthy. I also felt that Nick needed to be involved in the whole process and I wanted him to be aware of exactly what was happening, what he was doing and what was going in his mouth. 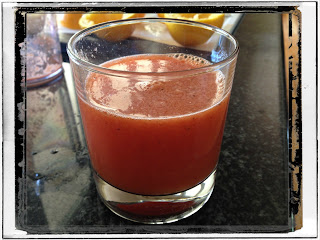 The easiest way for me to approach the whole juice *thing* was to look at it from an RDI angle. I have the words 'edge plus one' imprinted in my brain and I continuously remind myself to look at Nick's edge of competence (regardless of what we are doing) and ask myself, what is his 'plus one'. This is how we continue to progress.

Over the last few weeks I have planned many activities revolving around the making of juice. As always, I decide on our roles and then start each activity with something that Nick feels comfortable with before adding in the challenge (plus one). We have a really solid guiding relationship in place; therefore Nick trusts me and is happy to be guided. I in turn continue to be mindful about giving him opportunities to *think* for himself. I don't want to do everything for him. I want him to make his own discoveries (with scaffolding if necessary!).

Shopping for the oranges
Unpacking the oranges into the fridge
Introduction to an orange squeezer
Collecting items needed to make freshly squeezed orange juice
Using the orange squeezer
Pouring the juice
Drinking the juice (initially we each had our own glass)
Cleaning up after juicing (items in the sink, rubbish in the bin, wiping the bench)
Introduction of a carrot and a big ol' mean juicer machine
Placing small pieces of carrot into the juicer
(Nick hates the noise so he heads off to the sofa and tells me when to "Go")
Introduction of blueberries and taking turns to place them into the big 'ol mean juicer
Introduction of pear ~ yuk, Nick didn't like this one!

Nick being brave and turning on the mean ol' juicer ~ we will give that one a miss for a while! :)
Introduction of apple, taking turns to cut and place in the juicer

Email ThisBlogThis!Share to TwitterShare to FacebookShare to Pinterest
Labels: edge plus one, RDI, Relationship Development Intervention