Many moons ago, before I started with an RDI consultant, I devoured any RDI information that I could get my hands on. Back then, our only way to access the internet was with dialup. This was a laborious process and all very hit and miss (no facebook back then!). Thankfully I was directed to a proactive Yahoo group called RDI Mid Atlantic and it was a mine of information, hence most of our knowledge came from this site. *The site has since disbanded.

RDI has evolved and grown since that time, however, I picked up a few goodies that are still used to this day. The concepts are simple, yet hard to put into practice. I can vouch for this!

One of the most life changing concepts for us has been 'same but different'. If you have been following this blog for a long time, you will be aware that Nick was an extremely rigid child. Everything had to be the same and woe betide anyone who added a little variation to his static routine.

With the words 'same but different' in mind, we began to add teeny tiny variations to rigid patterns. For example; when at Speech Therapy, Nick would not tolerate anything on the table and with the sweep of his hand everything would go crashing to the floor! The Speech Therapist started out by placing a pen on the far corner of the table, reassuring Nick that it was fine to stay there. The table was as Nick liked it, yet it was a little bit different! After a few seconds the therapist removed the pen. Thereafter, each session Nick attended, the pen was put onto the table for longer periods. So on and so forth....

This was the start of helping Nick to understand that 'change' was okay. Variations to routine and order are scary to a child who needs the security of sameness, however, using the 'same but different' approach in everyday life successfully enabled Nick to become the young man that he is now.

Today is a prime example of how 'same but different' has helped him. I made arrangements for Nick to be taken home after school. I did this for a couple of reasons. (a) I was going out for lunch. (b) I want him to experience changes in his routine.

Unfortunately, it was raining heavily when it was time for Nick to go home. Bronny (who was taking him home) parked her car close to the school veranda in order to keep Nick as dry as possible. Due to the rain and some recent plumbing work, her car got stuck. Luckily she was able to get a friend to come and tow her car out of the mud! If this had of happened a few years back Nick would have become extremely stressed and unhappy. Today, he enjoyed the novelty of the experience and was keen to share his thoughts. "Nick loved being pulled out with the rope and was laughing and pointing at the rope saying oh no oh no." 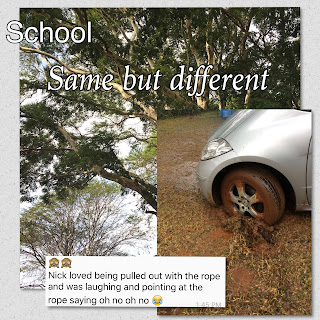