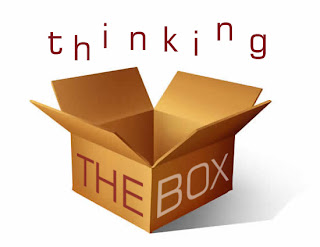 I have been thinking!

I don't generally put too much thought into thinking about autism and the impact it has on our family!


If I did, I would probably end up in that not so nice place 'up country' (Durbanites will know the place I mean!!).


However, I have been thinking that I would like to give a brief explanation of why I do what I do with Nick!  Yes, I do realise that it is not necessary to explain myself and frankly, my journey with autism is not that spectacular!!


The one therapy (besides O.T, Physio and SLT) that I have chosen to do with Nick is not one that is widely used in South Africa! The general thinking in this country is that Relationship Development Intervention is a bit 'out of the box' ....so to speak!! It is a therapy that really pulls in the parents - I have gone from... handing my child over to other people... to taking on the responsibility of creating a truly meaningful relationship between myself and my child!  That has got to be good - don't you think?! :)


Why do I bother, when life would be so much easier if I just hand over that iPad and let Nick do whatever he wants to keep himself happy? Sometimes I wonder!!!!!  However, I want to give him the opportunity to experience life, I want him to be at ease with new surroundings/people/LIFE! It would be remiss of me to not use the opportunity to improve his quality of life..... and therefore mine!


For me - RDI fits our family.  There is something quite special about addressing the developmental stages that Nick has missed out on. I will be honest and admit that I am not completely driven to put in 100% effort, however, the balance I have created is working well for now!

~*~
..... and when life gets a bit overwhelming........
I do something about it!
even if it meant freezing my butt off at a very boring rugby match!
(I spent more time checking out the comings and goings of the teenagers!!) 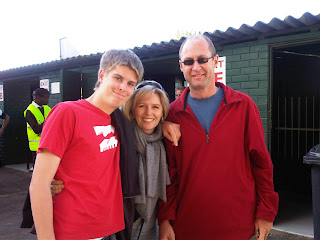 ~*~
Thanks to my friend who reminded me that it is always possible to make a plan! 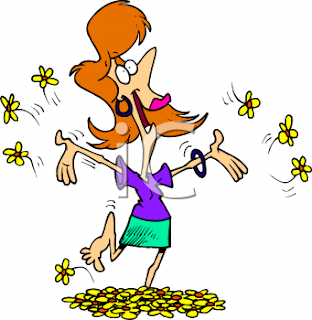 Email ThisBlogThis!Share to TwitterShare to FacebookShare to Pinterest
Labels: RDI, Relationship Intervention Development, thinking out of the box

That wasn't meant to happen!!

I had a bit of a wake up call today, yesterday!
If you have been following my blog you will know that over the last couple of weeks I have been creating interactions with Nick that are all about 'US'.  I have made lists, planned interactions, thought about how mindful I must be at giving Nick the opportunity to 'think dynamically' (e.g. cut back on all the verbal stuff, use as little prompting as possible, make sure that I give him time to process information!).
Our consultant then assigned me another objective because it was time to go a bit deeper!  Here it is......
The Student applies an understanding of Continuity and Permanence, to anticipate recurrence and continuation
Yes, I had to read it a few times to get my head around it! :)  Basically, what it means is that Nick should understand pauses within 'US'. Our consultant is looking for "the challenge that Nick *anticipates* continuing by NOT showing stress within the pause."  It sounds easy but when you get down to the nitty gritty, it is hard work!
#1 Think about the interaction
#2 Think about the 'connection' within that interaction.
#3 Think about the pause within that connection!
So anyway, I planned an interaction: It's called Stalk the Nick!!! (I know, the game sounds a bit childish for a 12 year old kid, however, lets face it, this is his developmental level - yes it does suck.....but such is life!)
I set up the video camera to record our interaction! Just in case you are wondering why I have so much video footage to share....... it's not because I love to see myself on camera, believe me, I really don't! Videoing everything we do gives me the opportunity to watch the footage and to reflect on what we were doing, what went great and what I could do to improve that interaction.
As I was saying.... I set up the camera and started walking slowly towards Nick, using my body to emphasize 'look out, I am coming to get you'.  Well, I was a bit astounded when he went to a drawer and proceeded to take out the dishcloths!  I kept my mouth shut and waited to see what he would do next. When he started shoving the cloths back into the drawer, I realised that he was creating an old pattern......... a pattern that we had been working on a few weeks ago!
Light-bulb moment!!!
The video camera was running, therefore, Nick thought it was time to 'do something'.  I hadn't indicated what we were going to do, so Nick took a flier and chose an activity!
I stopped the camera and tried again later!  I won't bore you with all the details, just check out the video below!
Now you can look at this in two ways.............
Was Nick being a dynamic thinker because he assessed his surroundings and chose what to do?
OR
Is his 'thinking' so entrenched in 'static' mode, that he associated the video camera with having to 'do something'?
As for me, I need to go back to thinking about... The Student applies an understanding of Continuity and Permanence, to anticipate recurrence and continuation!
~*~
P.S. Played 'Stalk the Nick' in the supermarket this afternoon (hilarious fun).... am very glad that I didn't bump into anyone I know!!!! :)
Posted by Bright Side of Life 2 comments:

Let me tell you this....... Relationship Development Intervention is not a walk in the park! It is not as easy as it sounds!


When people ask me to tell them about it.......
I generally say;
It is about building the guide/apprentice relationship (i.e. me and Nick, mother and son)
It is about me learning how to be an effective guide (believe me, I really need this!)
It is about going over the developmental stages that Nick has missed out on and getting him back on track (oh s**t, this is going to take a long time!)
It is about the interaction between us!
It is about me giving Nick to the opportunity to 'think for himself'
It is about DYNAMIC THINKING!
(This just the tip of the iceberg!)


I didn't need to think about any of this with Thomas when he was a wee boy..... and we still have an easy flow to our relationship (except when I am yelling at him for not organising his soccer kit the night before and now his dad is waiting in the car and they are going to be late for collecting Oliver and getting to the school bus before it leaves blah blah blah!!!).  All 'normal' stuff! :)

Thankfully, I have someone to guide me!


If you are interested in learning a bit more about;
Reaching your child
Experience the Experience
Anticipate you’re actions/reactions to guide your child
Collaborate interactions in your day
Helping your child to communicate without words
You can check out this Cheat Sheet!.

~*~
Posted by Bright Side of Life 2 comments:

Right, that's it, no more procrastinating........ it's time to get with the program.... again!
I am reading RDI, I am thinking RDI, I am talking RDI.......... and as soon as I get my list together... we will get back to doing RDI!!
For sure, I can implement RDI during the day, however, I find that I am a lot more focused if I know what I want to do, how I am going to do it and what my expectations are. At this stage of my RDI journey I still need to create a written framework for each activity that I wish to do with Nick. I need to write down the chosen activity, my role and Nick's role within that activity, I need to establish the boundaries and also make note of any external factors that may be distracting and that need to be removed!
I am capable of doing all of the above without completing a written plan, however, (and I repeat!!) I remain more focused if I have written down my objectives and stick to them! I have also decided to put together (a relaxed and flexible!!) daily schedule, to enable me to look at what I am doing during the day and how I can include Nick!
The most important point of any objective is to remember that any activity/interaction we do together must be about 'US' not about the task itself! My child is very task orientated, however, his biggest problem is building relationships; and this is what I want to focus on! (of course there are many other issues, but I am not going to address them in this post!).
I am also building up a list of 'stuff' to do with Nick.  He is a tricky child - he doesn't play, he has never played, he lacks the intrinsic desire (polite way of saying no imagination!!!) to play. As you can imagine that makes life a little more difficult! What do you do with a kid who doesn't play?? As you will see, my list includes many household activities...... I am going to be squeezing some play stuff in there as I go along! :)
Interaction ideas (and these are just basic starting points!)
Walking together, stopping, starting, walking fast/slow, running
Making noises: Nick is beginning to imitate sounds so I am going to make the most of it!
Clapping games: the boy is not good at this so we will start out slowly; ie: high fiving!
Trampoline: I bounce, Nick bounces (if I can get him on it!!!!!)
Swinging: I swing, Nick swings. We swing together.
Gardening: I cut a twig, Nick puts it in a box.
Stacking the dishwasher: Taking out the plates/cutlery. Putting in the plates/cutlery
Collecting the newspaper/mail: This will be about the walking – not the collection of the paper.
Eating/giving food:  I will place one chip/piece of apple on the table, Nick will put in the bowl.
Brushing hair:  I will do one stroke of his hair and then give the brush to Nick, for him to then brush.
Bath time: I wash Nick's leg, he then washes his leg (or whatever!). I pour water, he pours water....
Hand tower:  Nick doesn't understand this concept. I will place my hand on top of his, only once! (it's a start!)
Grocery shopping: I hand Nick an item, he puts it in the trolley/on the conveyor belt. I hand him a bag, he puts it in the car! I unpack at home and pass Nick an item, he can put it in the cupboard.
Laundry: I pass Nick an item of clothing, he puts it in the washing machine.
Books: He holds the book, I turn the pages. I hold the book, he turns the pages.
I could carry on and on................ but it is bed time!  The following video clip is just for fun, please excuse the camera man..... he is a bit wobbly and the quality of the film is not the best!
Posted by Bright Side of Life 3 comments: