It's holiday time and I am loving that we can take life slow (er).

I have been thinking about our days and how we can fill them productively, although also taking into account that there will be a lot of down time. Nick doesn't play or draw or ride bikes, therefore his spare time is spent on the iPad, computer, listening to music and/or flipping through books! It is not possible to be a proactive Super Mum and keep him busy all the time... and that is okay!

I decided that the best thing for me to do would be to work at creating a balance. We could have social time by going out for coffee, walks and/or visiting friends. We could also carry on with our daily activities like shopping for groceries and other general day to day stuff. I could assess each day and incorporate RDI planned engagements where possible. AND, we could also have our chill time!

A friend suggested that I start a vegetable garden with Nick and I thought it was a great idea. Even better I could approach it from an RDI angle. With that in mind, we headed off to the local nursery and purchased some lettuce and flowers. Nick's role was to be in charge of the trolley and also help with the plants. 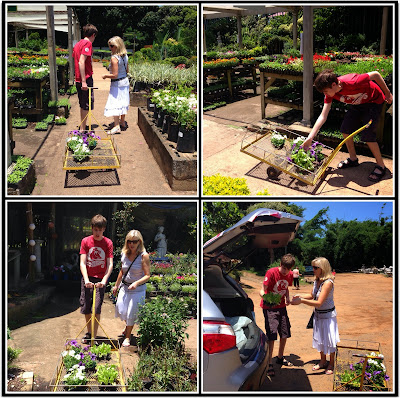 Life took over and it was a couple of days before we started preparing our trough for the lettuce plants. Again, I set up the activity as an RDI planned engagement. My plan was for us to carry the bag of soil together and then have a regular pattern of using a small spade to take turns moving the soil. I thought Nick would be able to handle that quite easily. My challenge for Nick was for him to think about another way that we could move the soil rather than use the spade (very slow). I wasn't too concerned if he couldn't figure it out, I just wanted to give him the opportunity to think for himself. The video clip below spotlights the process of removing the soil. Unfortunately Nick is facing away from the camera, although you should be able to read his body language.

I found that Nick was quick to pick up on what was going on and he naturally made his own decision about how to move the soil other than using the spade. When moving the soil I did help to scaffold the activity just a little bit. I say the words, "shake, shake" and I really love that Nick started shaking the bag with me. We were working together so nicely. At one point Nick moves away so I pause the action and then Nick comes back to help again.

This next *very short* clip is another little challenge for Nick. I decide that we don't have enough soil, therefore we need to collect another bag from the garage. I am really thrilled that Nick stayed with me and also help carry the very heavy bag from the garage to the trough.


The following clip shows Nick's next challenge. I spotlight that we need to open the bag and Nick immediately picks up the scissors (this is second nature to him now!). He really battles to operate the scissors and he is unable to cut the bag. I scaffold quite a bit in order to help him out and although he can't manage to cut I am really thrilled with his resilience. What really blew me away was the fact that he decided to make his own plan by putting the scissors down and trying to tear the bag open using his hands.

Throughout our planned engagement I made sure to pause frequently and give Nick time to problem solve. I used declarative language so that Nick could hear my thoughts and make his own plan. We took it slow and there was no pressure to perform. I do admit to talking too fast and being too quick with my movements while Nick is trying to figure out the scissors ~ the beauty of taking video footage means that I can look back and reflect on progress and also bookmark any areas that can be improved upon.

Note to self:  Remember to SLOW down and PAUSE a bit more!

As mentioned above, Nick's resilience shines through and for us this is HUGE!

Since taking the above footage, we have planted our lettuce and have also attempted to water them using a a juice bottle that requires squeezing. This activity provides so many opportunities for planned engagements and introducing further challenges. Who know, maybe Nick will even attempt to taste a lettuce leaf!! 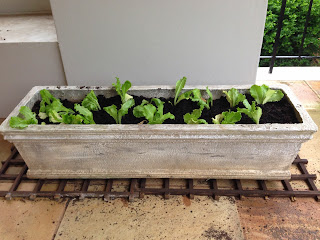