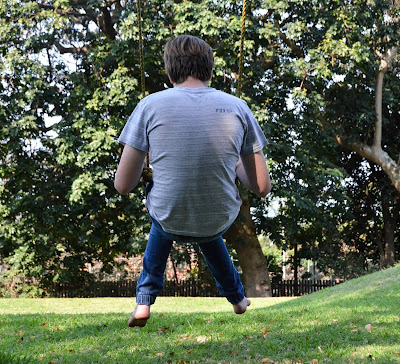 With hair hanging over his eyebrows, Nick tossed his head in the manner of Justin Bieber. No matter that he pulled it off nicely, I was concerned that he would end up with whiplash!

Time for a trip to the Barber shop.

In the *old* days, just the thought of driving to the venue used to fill us with dread. Woe betide us if the regular girl wasn't there. Do you know that feeling of when you walk into a room and your heart sinks because *IT IS NOT THE SAME* as it was last time.... and the time before? Each part of a haircut experience was (dare I say it?) a nightmare. Nick would sit on my lap, screaming for Africa, as I hugged him tight and tried to deflect any blows landing on the poor girl behind the scissors.

We tried singing, counting, music, TV, cross voices and calm voices. We tried different towels around his shoulders. We tried clippers, scissors and a combo of both. I tried deep pressure, music therapy, head massage.

During this period of time we started working on the RDI concept *same but different*. Simply put, we added teeny tiny variations to anything and everything to do with Nick's day. Gradually he came to realize that it was okay to drive a different route to get home. He felt comfortable eating off a variety of plates, not just the same old one. He didn't become stressed if his daily schedule changed. We phased out his picture schedules because they were no longer needed. Slowly but surely, his world began to expand.

With each little variation in all aspects of Nick's life, he became more accustomed to changes in his environment. His stress levels dropped dramatically, as did mine! 'Same but different' is not the only component of Nick's increased resilience, however, it was a great starting point for us. It is also a concept that I still apply today.

Way back in the *old* days we headed home immediately after a traumatic haircut. It was all too much for Nick and the safe confines of home was the only remedy to help him feel secure again. Frankly, I also left the Barber shop feeling wrung out and gasping for a cup of tea!

Nick was in the garden, swinging away merrily and stimming on his iPad.

I called out, "Time for your haircut".

By the time I had organised myself, he had come inside, put on his shoes and was heading to the car! When we arrived at the Barber (same Barber shop), we noticed that there were two new girls that Nick had never met before (different). I explained briefly that Nick was autistic and didn't talk. Kudos to the stylist, she treated Nick no differently from any other customer. She clipped and cut, manipulating his ears and neck. He also got a good old drenching from the water spray bottle. While this was going on, Nick and I took a photo and created a sentence on the iPad using the Abitalk app. No sweat!

Before returning home, we popped into a local restaurant for a cappuccino and milkshake. I also remembered that I needed to buy some flour for a playdough mix, therefore on the spur of the moment we also went shopping! 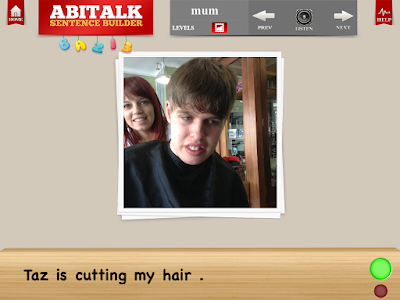