My husband is a bit of an electronic geek.  He has been known to fire up the Garmin for a trip to Mbona (a route that we have taken many many times!!) (UPDATE!! apologies to husband - he said he fired up the Garmin to charge the batteries!!!). As for that watch he wears to keep track of his running routes and the kilometres he has accumulated each week blah blah blah!! :D  We have boxes of bits and bobs - odd things that belonged to something but we can't remember what! We have old phones, old cameras, an old computer, wires and leads and goodness knows what else! 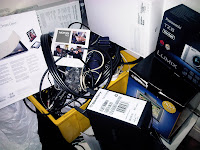 As for Thomas, he comes out with all this strange computer geek language that I don't understand....ripping, de-fragmenting, IP address, firmware and metadata. He laughed at me the other day because I said "url" - personally I think it is a lot quicker to say the word instead of saying each letter!!


Nick is also quite attached to gadgets!  We have a very old outdated laptop that Nick loves - on this laptop he can play games and watch DVD's.  I use the word 'play' quite loosely because Nick does not play..... he stims! He is quite capable of repetitively playing a particular scene on a particular DVD for hours.  Obviously this really is not a great habit to have, therefore, we restrict the time that he spends on the laptop.  Generally it is used when we need a break!!!!!  Bad parents! ;)


Nick has a couple of AAC (Alternative Augmentative Communication) devices. These gadgets can be very useful in helping a non verbal child to communicate. However, we have been careful not to use each device as a tool for Nick to request his wants and needs, as this can become quite static and one sided. i,e. I want some juice, I want a biscuit, I want TV etc etc. We use the devices to share our experiences with each other, to build words, to help with the construction of sentences, we play games and comment on what is going on. The GoTalk boards are descriptive and forever changing! The Lightwriter is not as popular as the GoTalk....... and it cost a bloody fortune (iPads weren't around when we bought it!). The Lightwriter doesn't have voice output so Nick is not so enthusiastic when using it (voice output creates a lovely auditory stim for him!). Have these devices been wildly successful..... no!  However, I do think it is important that Nick is exposed to different forms of communication. 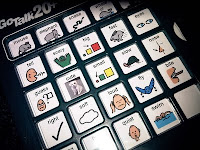 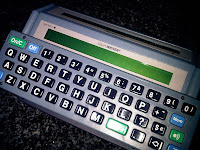 Which leads me on to the next gadget! The iPad!


For a few months now Allan has been deliberating over the iPad.......to buy or not to buy! Please bear in mind that his thinking was not really revolved around Nick!!  Eventually the temptation became too strong for him, especially with the arrival of the latest addition of the iPad2 - another gadget to add to the collection!


My only request was the purchase of the proloquo2go app for Nick. I want to include Nick in the use of the iPad2 but his involvement must be people related - anything he does must be interactive with someone else.  I don't want him to start using the iPad as a mobile TV and I certainly don't want to introduce him to further games - no matter how educational they may be!


I am not sure where we are heading with prologuo2go but at this stage I am using Nick's love of listening to stories......... I have started making up some story boards for his favorite books - with Nick looking over my shoulder!  I talk about what I am doing and include him the process. :) 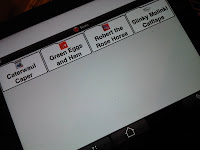 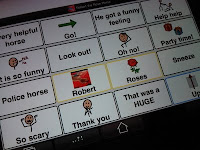 We are just taking it slow and keeping it simple............. both of us learning how to work this new gadget!  The following clip has been heavily edited due to the fact that Nick's favorite books are seriously long and any more than two minutes of footage gets a bit boring!

Righto, time for me to go and find my best gadget!!
My Kindle!
~*~
Posted by Bright Side of Life