Our young Nick is a creature of habit! In fact, I also admit to being a bit static in my ways when it comes to Nick's night time routine. By the time 7pm comes around, he is tired.... and I am in need of some time out!


Nick is an early riser and has been for many years. We have tried the *putting him to bed later* plan, and the *block out curtains* plan! I have thought about the *melatonin or heavy duty meds* plan. At the end of the day, we have come to terms with the fact that the kid wakes up early! However, he does have one static pattern that is beneficial to us all ~ he doesn't get out of bed until we collect him! :)


Many months ago, we decided to throw Nick a bit of a curve ball ~ we were invited to have supper with friends (at their house) and we took him with us. I gave him supper before we left home and we took along our trusty old/on its last legs laptop. Nick was just fine and dandy, very chilled to be surrounded by kids, noise and the general mayhem that happens when you mix a few families together.


Unfortunately, this was not the case when we got back home. He quickly became dis-regulated and insisted on the bath and then the TV (that damn routine!). He then told me that he wanted to go to bed, however, as soon as he got into bed he started crying his eyes out. When I tried to comfort him, he pushed me away and waved goodbye. Eventually, the only thing I could do was to say goodnight and stand outside his closed bedroom door, listening to him sob. It is the most terrible experience, to have a distraught child and no way of connecting with him to help him when he can't help himself. The remainder of the weekend was a write off! Nick was overtired and miserable and it took him two days to recover from that one night out! I am sure that you can understand my hesitancy at exposing him to further evening outings!


We have had the laziest summer holiday ~  life has been slow, relaxed and generally without any stress. We are all feeling extremely mellow. Perhaps this is why we spontaneously decided to take Nick out for supper with us last night!


The spontaneity came about due to Allan falling asleep on the sofa (it must be a man thing!), while his delicious curry was bubbling away on the stove. Hence no supper, although it has to be said, my Basmati rice was cooked to perfection! ;)


Right then, we made the momentous decision. It was now or never ~ Operation Take Nick To A Restaurant At Night.


Now what......... the routine? What to do? Is he going to cope? What about his supper? The bath? The loo? What will he be like at the restaurant? Will he lose the plot when we get home? I know it sounds silly, but when you have a kid with autism, life can be fraught with anxiety; and I am not talking about Nick here!


We had been splashing around in the pool for quite a while (this was my solution to the bath!) and Nick had obviously taken in a bit too much water! He hopped out of the pool quick quick, tore off his cozzie (really need to do something about this before he scares the neighbours!) and went racing off to the loo. Unfortunately the aim went a bit wonky and he made a mess. Sigh, now he really needed that bath! It helps to have a teenager on site to call upon when necessary, my lovely Thomas sorted out his brother while I sorted out the supper!


Nick was bemused to be heading out in the car after his supper, however, he took it in his stride and went with the flow. We sat down at our allotted table and again, Nick was very chilled. He gazed around at his surroundings, checked out the cars driving by, the birds landing near his feet, the people coming and going.... Not once did he ask for the TV, laptop or iPad. I wouldn't say that he was wildly ecstatic to be there, the serious expression on his face says it all, however, he wasn't unhappy! :) I did give him the iPad to play with while we ate our meal. All in all, our outing was a positive experience for the whole family, Nick included. 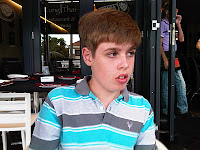 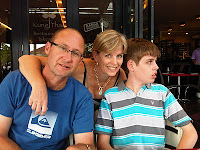 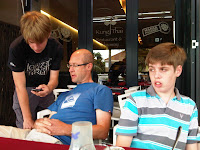 We did have a minor problem when returning home. Nick didn't mind that bath time was out of sync (as in, he had already had one), however, he refused to go to the loo! I kept him up for another half an hour and tried again..... No go! Needless to say, he ran to that loo pretty fast when I got him up this morning!!! Other than that, there was no fall out. :-)

I celebrate that Nick has become more flexible with changes in his routine and environment. It certainly makes life easier for us!

~*~
Posted by Bright Side of Life

Email ThisBlogThis!Share to TwitterShare to FacebookShare to Pinterest
Labels: Autism, dining out, flexible