What a good mother!!

Sigh, I am not so good at being a mum who supplies ready baked cookies for school lunch boxes! In fact I am down right useless! Nick doesn't eat any type of biscuit or cake, which is a bit of a bonus considering his really bad diet! The other kid of mine will munch his way through anything and he often throws me a little line that makes my mother guilt rise to the surface!

I eyed up the three very over ripe bananas that had been sitting on the bench for the last few days. Bleurgh, no way would they be eaten and it would be a waste to throw them out! Time to make a plan (and appease my guilt!)

I haven't done much with Nick over the last few days as the poor kid has been a bit under the weather with a head cold. However, he did perk up today so I took advantage of this and wrote up four (yes, four!) planned engagements for us to do together. All easy stuff with a hint of a challenge!

#1. First up, I chatted to Nick about a shopping list. I suggested an item that we needed to buy and he then typed the word using his Lightwriter. The challenge for him was to wait for me to acknowledge the word that he had typed and then WAIT for me to write it down on a piece of paper. The waiting is hard for Nick as he tends to type a word and then quickly erase it! The challenge was successful, although I did keep the engagement short and only focused on five words (without being too bothered with the spelling). 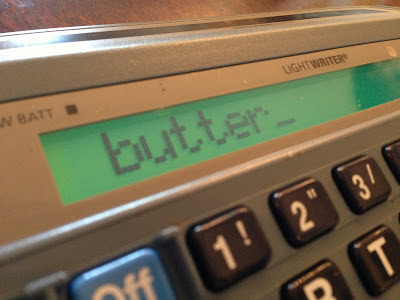 #2  With shopping list in hand, we then headed off to the supermarket for our next planned engagement. Grocery shopping is a breeze for Nick, although of late I have been a bit slack about adding variation to our little routines. Usually I will pass an item to Nick and he will put it in the trolley, however, this time he needed to be aware of what I was saying and where I was looking, in order to choose the correct item and then GIVE it to me!

#3 Fast forward to later in the day. We needed to peel the bananas to add to the other ingredients and the video clip below shows how we went about this.


#4  Last but not least, we then had to remove the cooked Banana Bread from the baking tin and then peel off the paper. Nick has never done this before and he was an absolute champ, although he wasn't too keen on the *feel* of the greasy paper! 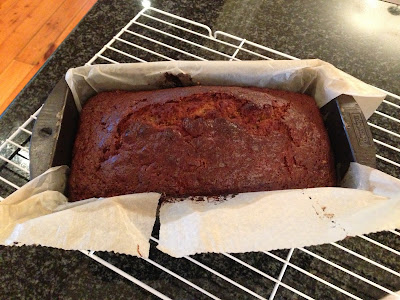 So, there you have it. Four planned engagements that were very simple and just enough of a challenge in order for Nick to learn further. Four opportunities for me to practice guiding my boy to *think* for himself. And one freshly baked Banana Bread for my first born!!


I read this short ARTICLE today and wanted to share it for those of you who are interested in learning further about RDI.