Introduction: I have always been interested in Intensive Interaction and if I had of known about it when Nick was a little boy, there is no doubt in my mind that I would have started our autism journey with this approach. I linked up with Sara, the author of this story, many years ago and we have been following each other's journey's ever since! Sara has a lot of information to share, therefore I am going to split up her story into three blog posts!

Thank you, Sara, for taking the time to share your story. 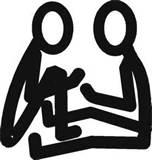 When we started Intensive Interaction with my son Tom (then approx 7 1/2), there was no way of knowing just how much this very modestly marketed and exceptionally simple educational programme would benefit him. We have only kept going with this programme for such a long time (about 3 years) because it just keeps on giving and giving. In fact, as Tom acquires even more of the basic learning skills, so the learning outcomes from these skills increase accordingly. Thus the learning outcomes become even more in tune with typical development. In our experience it has been the therapy that promises the least and gives the most!

Little Tom regressed from around 15 months onwards and disappeared into a land called 'Autism'. The light that can be seen in his eyes in this photo went out and we just couldn't get to our baby any more. It felt like he had been kidnapped or had vacated his own body and left us with an empty shell to feed and clothe. 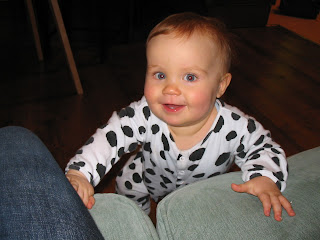 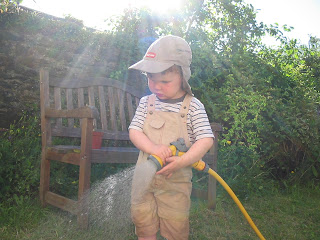 Our house felt silent and childless and we were overwhelmed by his distance. We were devastated and utterly heartbroken. This was all compounded by bad experiences with the people being paid by the state to help us. I was desperate to get my baby back and I would have stopped at nothing to do so. I looked around for suitable therapies....

What most autism specific programmes forget...

During their first year, neurotypical babies achieve the most complicated learning of their lives ~ they learn more during this period than at any other time. The stuff they learn is vital for healthy or typical development. In fact, it is so essential that, if they do not learn it, they will probably end up with some sort of developmental delay/SEN, simply as a result of not mastering this stuff. It is the foundation for all other learning. Yet, because we are so accustomed to it being achieved seemingly effortlessly because the adult role in this learning is pleasurable, natural and also non-conscious, we are often unaware of it and it's absolute importance.

Here is an abridged list of what babies learn in their first year;

The enjoyment of being with other people and seeing the potential of socialising
How to build relationships
A sense of self and self worth.
How to play and be playful
To read and make facial expressions
To read and use body language
To share personal space
To take turns
To read and make a wide variety of eye contacts
To do sequences of activity with another person
To use vocalisations
And much much more....

Perhaps more poignantly, much of this early learning is impaired in people who have a diagnosis of autism. It can be impaired even in those who have some higher skills such as speech or even conversation. It was severely lacking for Tom even though he was verbal. Often Intensive Interaction (I.I.) is used with non-verbal people but can be used for anyone needing this learning.

Parents of children with autism sometimes express some sort of shock when they find themselves communicating/playing with typical babies. It can be a nasty reality check and upsetting for us to see what babies are capable of and just how communicative they are. Many people are familiar with the YouTube video clip of toddler twins communicating playfully without words.


These pre verbal children have so many very sophisticated communication skills. They are turn -taking, vocalising and using and responding to complex intonation. They are reading each other's body language and facial expressions (and using body language and facial expressions at a sophisticated level). They are using and reading a complex array of eye contacts for different purposes (contrast ABA's "look at me"). They are sharing personal space, enjoying one another's company and being very very sociable. They are sharing 'jokes' and showing empathy. They are attending intently to one another. In fact, you can almost watch them making brain connections that will eventually lead to verbal conversation and other more advanced social communication skills.

Why other programmes failed Tom

Imagine what the twins will go on to learn next. Much of what they will learn (speech, naming colours, number, matching etc) will be what we tried to teach Tom before he had all the crucial foundational skills these twins have. Imagine the advantage these boys will have in this learning over a child like Tom who had none of their skills.