Sara is talking Intensive Interaction. You can find the first part of her story HERE.

Tom's home programmes prior to I.I were not addressing the core of Toms's autism. Tom did actually learn some things (the kind of things usually acquired after the first year in typical development and usually more consciously) through these therapies, but they were further polarising his strengths and weaknesses. Because of the way in which the therapies were delivered, they also had detrimental unintended side effects: he learned that we disapproved  of his choices, that we were there to put unending demands on him and that a relationship with us was a terrible thing. We gave him no alternative but to withdraw deeper into 'Autism Land'. Through these therapies Tom became unhappier, more stressed, more distant - basically more autistic.

Because Tom was clever, his home programmes had taught him many things. This is how Tom was when we began Intensive Interaction.

He was verbal ~ very verbal with clear speech and a wide vocabulary. He would ask for things. He could read, write and tell the time. He sang hundreds of songs and he was bilingual, yet he used NONE of these skills and talents to communicate in a social way. Tom did not call us or use our names at all. He didn't show or share. Heartrendingly, he couldn't seek comfort from us when he was anxious or in pain; and generally, he preferred to be as far away from us as he could get. Furthermore, he had no sense of self, he never looked in the mirror or referred to himself. He could read and write, although he also didn't use this to communicate; rather he spent his day repeatedly writing out film credits, letters or numbers. 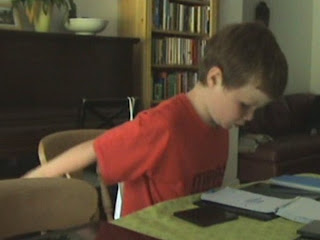 Back then, when we were just about to start I.I., the idea of following our child's lead was a difficult and a completely new way of thinking for us. We had run non-stop, full time, educational home based programmes for our son since shortly after his autism diagnosis at 2 1/2. Our emphasis had always been on bringing Tom into our world.  Suddenly we found ourselves in a scary place - doing a therapy that was based on the complete opposite philosophy; and so it was with suspicion and fear that we entered our son's World of Autism - a world filled largely with film credits, letters and numbers.

Five years of taking 'stims' away from him or restricting them had not had the desired effect of broadening his interests to other things, but had possibly had the opposite effect and made him want them even more! In the years since that time, I have come to believe that consistently taking 'stims' away from a child when you have no idea of their function can have a sledge hammer effect.

One of the many functions of Tom's 'stims' was an aid to blocking out the world when it became overbearing and he simply couldn't deal with it. He was also using them as a way to cope with physical pain (he had severe bowel problems, headaches, etc). I now believe that by forcing my child away from his coping mechanism, I was unintentionally breaching his basic human rights.

We were very pleasantly surprised when we changed our attitudes. Just though the simple act of joining him in his world we immediately saw results. There aren't many quick fixes in  autism but in that instant that you join your child you put an immediate stop to their social isolation. He no longer wanted to get away from us all the time and instead began to take an interest in us. He began to see the potential of us. His 'stims' instantly changed their function. They were no longer something that he did on is own and something that made him unreachable, rather they were a way for me to connect with him. 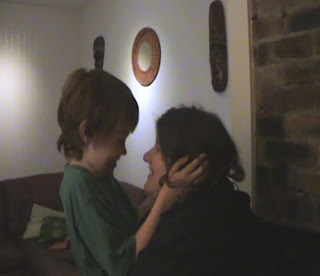 This was because, just by joining him, we were showing him that (a) he was worth spending time with, (b) we found him interesting, (c) we had stuff in common with him, i.e. shared his interests; and (d) we approved of his choices and interests. Tom's self esteem began to grow and in fact this was the beginning of a sense of himself as an individual (Tom had never previously referred to himself or to anybody else, he'd never even looked in a mirror).

I began to shift my views on Tom's autism ~ whereas I had previously considered him to be unreachable, suddenly I realised that we were unreachable for him. I thought he was a poor communicator but realised that during all those years, Tom had been attempting to communicate with me but my communication skills were too poor to understand him. His 'stims' that I had previously detested because they appeared to take my son away from me were now a way for me to get close to him.

Intensive Interaction has a very different kind of structure and has no goals or objectives in the way that we typically understand those words, yet Tom's learning took off! The things he was learning are known as 'emergent outcomes' ~ that is ~ the adult provides the right circumstances and scaffolding and the child learns. We do know that children with autism will begin to acquire the skills that young babies acquire, but they also acquire many other outcomes that are difficult to predict. Yet they do come! This is very hard for some adults, very hard to let go, to stop controlling and also to trust that, given the right circumstances learning will happen! And because this type of learning is based on the parent-infant interaction, because it is not man-made but rather designed by Evolution/God/Mother Nature/The Gods (pick the one you believe in) it is far more complex and delicately balanced than any programme we could come up with by ourselves. It took me a long time to understand that something so simple could give so much; and that he was actually learning more and also more quickly than when we had very complicated programmes with umpteen objectives in place for him.

So despite my reservations, despite the simplicity of this intervention, despite the lack of objectives, despite the different type of structure or, in fact, because of all those things I am continually delighted by the amount of learning and other wonderful things that happen for my son through this beautiful, natural, free flowing therapy. It just keeps on giving and day by day I watch him transform into a more sociable, self aware, confident, playful, loving, flexible, communicative and above all, happier little boy.