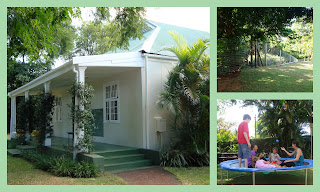 Our 'Kids First' home is getting a lick of paint, although it is taking a while to complete due to the painter only being available at the weekends!  Sampson (the painter - can highly recommend him by the way!) has a nasty habit of  sending  me a list of goodies to buy at the most inconvenient time (like a Friday afternoon!!!).  However, as luck would have it, Thomas had to miss tennis - has tennis elbow of all things!  Therefore, I had this brainwave of taking both boys to the supermarket and Thomas could film me and Nick 'doing stuff'.  Hah,  I knew as soon as we walked..........in the joint..... that it wasn't going to go as smoothly as I hoped.  Nick took the trolley and headed in a different direction to us and there was no way he was coming back! Sometimes you just have to go with it!!! Mind you, when it came to being with me and 'doing stuff' he did great! :)
The following clip shows a few things......
The following clip shows us unpacking the groceries onto the conveyor belt.  I am aware that there is not a lot of joint attention or co-regulation going on!  However, the reason I have added this clip is because Nick suddenly discovered that the conveyor belt moves!!  I was delighted to see him make this discovery and I found it fascinating to watch him trying to figure out what was going on (as did the lady behind the till!)  :-) I was also surprised when Nick noticed that there were still items left in the trolley and he took them out.

Have a great week!

HAPPY BIRTHDAY TO MY FRIEND LINDA
WHO TURNS 50 ON FRIDAY! xx
~*~
Posted by Bright Side of Life