Nick has grown out of a lot of his clothes and his cupboards need a good clean out. I thought it a good opportunity to involve Nick in the process of sifting through his clothes. Mind you, typical teen that he is, clothing doesn't mean a lot to him!


I wrote up the following framework for us.

My main aim is to get a lovely co-regulatory pattern going and then swap roles, applying the edge+1 concept to encourage further learning and progress. To be honest, I am more interested in the interaction between us than the chore of cleaning cupboards.

Remove the clothing from Nick's cupboard and sort into two piles. One pile for 'keep' and the other pile for 'give away'.

I take out an item of clothing, designate the pile it should go on and then give it to Nick.
Nick places the item onto the correct pile.

Nick passes me an item of clothing
I take the item from him and decide which pile to place it on.

Use two signs..... 'keep' and 'give away'. One sign to be placed on an ottoman and the other on the floor. Choose one shelf of Nick's cupboard to work with. The first shelf has a minimal amount of clothing (use for our first engagement). The second is jammed packed full of winter items (use this for our second engagement).

Give a brief explanation of our roles. Use body language and facial expressions to convey information. Use the words 'keep' and 'give away' to help scaffold the placing of each item.

Our first attempt didn't go well. Nick was in chore mode and didn't want to be there. I could have written off the activity, however, I felt that he needed further encouragement and that sometimes limits should be set. To be frank with you, I told Nick to pull himself together and stop whining! To his credit, he listened and began participating. I decided to do most of the work and keep the activity short. I kept my mood light and calm and even managed to get a small smile out of my child. Oh, by the way, he swapped roles quickly and without any stress.

Our second attempt was way different. I casually mentioned to Nick that we were going to do some more sorting in five minutes. Anyhow, I wandered off to check out something and when I came back to find Nick, he had disappeared. I looked all over the house and eventually found him in his bedroom waiting for me! :)  How's that for a change around?

We worked on his second shelf that contained his winter clothes. I passed him an item and called out where it should go. He placed it correctly. I could feel that his mood had changed and that he was happy to be with me. I started throwing the items at him, one at a time. He caught onto this very quickly and his face just glowed with pleasure. I encouraged him to swap roles by moving to where he was standing and he immediately realised what his new role was. To great amusement, he also threw the items to me. He threw them one at a time, waiting for me to place the item on a pile before throwing another one.

Our activity went so well that I decided to add in another little challenge. Using the clothes from the 'keep' pile, I tossed them (one at a time) to Nick. He then threw them onto the correct shelf in the cupboard. We had a good laugh and Nick was really happy being involved. He watched me for my reactions and was very aware if I changed my direction of throw or went slow or fast. This engagement was all about the interaction between us and the clothing was just the prop.  As for the mess in the cupboard.... I will have to make another plan! 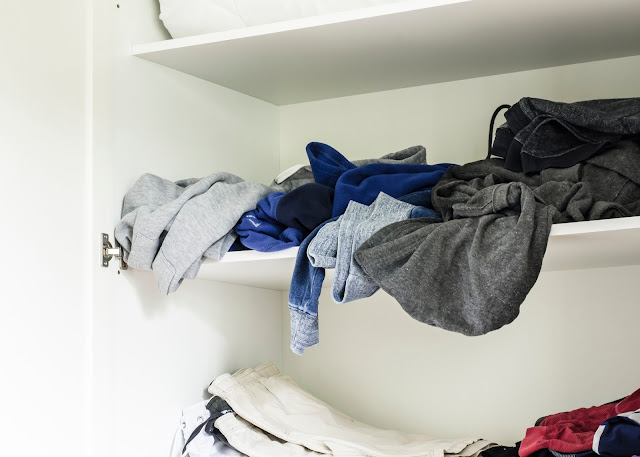