A friend asked me a perfectly simple question. "Do you have to brush Nick's teeth?"

Yes, I do. We have tried many times to teach Nick to brush his own teeth, however, his severe dyspraxia and low tone makes it very difficult for him. He also chews his toothbrush so badly that I need to replace it every couple of weeks.

Mind you, that simple question was a bit of a 'aha' moment and has given me the motivation to try again.

I recently bought an electric toothbrush and introduced it to Nick a few days ago. The noise and vibration is not stressful for him, although he does clamp his lips together tightly which makes it difficult to reach each tooth!

Anyhow, I wrote up a RDI framework to help guide Nick in the process of learning how to use the electric toothbrush.

My objective was Edge+1 and I also wanted to encourage observation and the awareness of taking turns.

No screen distractions. Keep the activity short. No more than three turns each for both #1 and #2

#1  Nick quickly picked up on the concept of taking turns. He did try putting the toothbrush in his mouth, therefore when it was my turn, I made a big deal of deliberately holding the toothbrush closer to my other hand and talking about the bristles and watching them move. I really wanted him to practice turning the toothbrush on and off before moving on. After a few attempts, I decided that he was ready for a little challenge.

#2  I spent quite a bit of time modeling this part of the activity. When it came to his turn, Nick was happy to put the toothbrush on his teeth, however, he found it very difficult to turn the toothbrush on. He had his thumb in the correct place but he couldn't see what he was doing. He didn't realise he could go by feel. He became a little anxious, therefore I decided to help scaffold the situation by helping him to turn on the toothbrush while it was in his mouth. After three turns each, I ended the activity.

What next:  We are going to be practicing this a lot over the next few days. I will carry on as per this framework and then make changes when I feel Nick is feeling confident and has made progress. 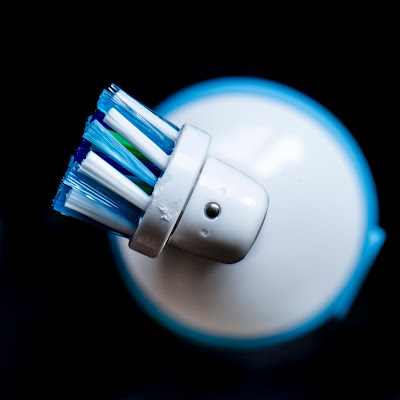